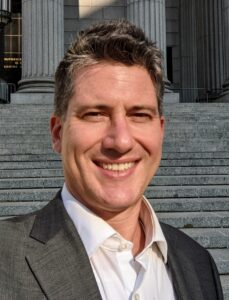 I have dedicated my career to representing plaintiffs in in Employment Discrimination, Sexual Harassment, and Personal Injury matters, and to securing compensation for victims of others’ wrongdoing.

I have represented clients in state and federal courts and administrative agencies (such as the U.S. Equal Employment Opportunity Commission/EEOC and the New York City Commission on Human Rights), among other venues. I also teach Continuing Legal Education (CLE) classes to other attorneys in the areas of employment discrimination, sexual harassment, and law practice management.

In addition to being a lawyer, I am also a human being who enjoys (among other things) exploring New York City, traveling, SCUBA/wreck diving, reading, video gaming, board gaming, and writing.

Tell Us About Your Case

Attorney Advertising. Prior results do not guarantee or suggest a similar outcome. Viewing, accessing, or using this website (including but not limited to the Blog and/or Contact Form) does not create an attorney-client relationship between you and Pospis Law, PLLC. Nothing on this website constitutes legal advice.